It’s about to get real nerdy in here.  Turn around and walk away.  Don’t read any further.  If you pass beyond this point of warning then all consequences will be your own and you will be held accountable.  So…  Do the right thing.  Just stop reading now.

If you’re still with me, sucks to be you.  But you were warned.  What I’m about to do is elaborate on Paulo Freire’s praxis by using Rene Girard’s mimetic theory,  See?  I told it was getting nerdy up in this piece.

Girard is the lens.  Freire’s praxis is the subject of study.  If you’ve read any of my previous posts you’ll have an understanding of Girard’s mimetic theory.  He basically, to make a point quickly, states mimesis is the “fuel” that creates culture, and the first pit stop is scapegoating.  So when we’re stressed, we scapegoat.  We find someone to blame, we blame the person or people for all our problems (even if it’s irrational), and then we either banish the scapegoat or kill the scapegoat (in either scenario we then idolize the scapegoat).  This sequence makes us feel “all better,” like momma patting us on the head when we have a booboo.  Girard argues in the ritualization of scapegoating we create culture.  We create customs, rituals, practices, celebrations, feasts, whatever you want to call it, we create culture through this production.

If we use a major religion as way to look into Girard’s point, such as Christianity, Girard would say Jesus and Satan are both scapegoats.  One scapegoat “saves people,” while the other scapegoat “seeks revenge,” but both scapegoats, ultimately, keep people from fighting each other.

Now Girard focuses on mimetic rivalry as his main point, and scapegoating is the only thing that stops mimetic rivalry.  In other words, when “in fighting” occurs, we find a scapegoat so “we can all just get along.”  Mimesis is a nerdy way to say “monkey see, monkey do.”

In a Native context, we can say the current paradigm of colonization has set in motion a mimesis based in conquest (and all the paracolonial conditions it comes with).  So this is where I bring in Friere.  Friere’s praxis is a heavily used (almost over used) term to show the societal “flip” when the oppressed minority reclaims power (education) from the colonizer and subsequently finds herself at a crossroads.  “Will I use my power (education) to become a savior or the devil?” we might imagine a conscientious minority asking.   This is a big subject of debate for a number of reasons.  From my vantage point, it looks like the #1 reason is “the dominant culture doesn’t want to lose power and become the victim of revenge.”  If anything hurts the dominant cultures’ feelings, then we have to talk it to death as they can release all their anxiety onto the world.  Take a chill pill papa smurf, this narrative is about Smurfette. 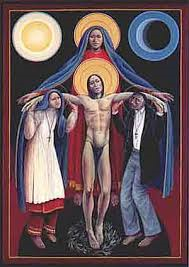 If Girard had anything to say on this Native discourse (he’s dead so good luck with that), then he would argue Natives are scapegoats returned, either back from the dead or back from banishment, like Jesus and Satan.

So have I seen evidence of how the “flip” is going to play out?  On a day to day basis, it looks like Natives love some power and we abuse each other with it (which is what the colonizer designed to happen, aka colonial mimesis).  But as far as organizing that power to exact revenge against the dominant culture, I haven’t seen it.  We’ve all seen Natives function as “savior,” when NODAPL attempted to stand up for clean water rights for everyone.  On a macro level, Natives tend to do what’s the best for everyone, which is why most of us are liberal in politics.  On the micro level, Natives tend to do what’s best for themselves, which is why most of us are socially conservative.

So there it is: in all it’s nerdery.  Do you think Girard’s scapegoat theory is applicable to Frerie’s praxis?  How do you think this will play out in a Native context?

(Disclaimer, aka Works Cited:  The image was borrowed from http://www.hediedformygrins.blogspot.com)

8 thoughts on “When Girard Married Freire: The Scapegoat Rides Praxis into the Sunset”