There’s a lot of insecurities in our very small Native world.  Native identity is a funky thing.  And people are people and people love power (even the ones who say they don’t).  We hold things over each other.  Sometimes these are purposeful attacks and sometimes we’re just reaching into the dark for anything we can weaponize.   Unfortunately, identity is a bullet if it’s not a bomb and even when people are kind they’ll still use it to cut you. 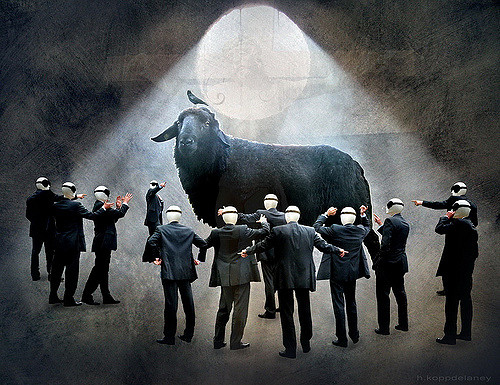 I’m going to give you an example of an age old practice:  scapegoating.  Now scapegoating is one of the oldest social customs, and Rene Girard might say it is “the oldest” custom.  But I’m going to put it in a Native context and then I’ll situate it in Native literary circles.

Here is how it looks:  The first time in my life I encountered this phenomenon was about a year after I moved to Santa Fe, New Mexico.  I had been living in Oklahoma (born and raised).  I think I was in Muskogee just before the move, and up until that point my Native identity was never called into question.  So much so I never even thought about identity until I was living in New Mexico.  Back in my early twenties, the late 1990s, it was a different world.

In 2004, I drive into Santa Fe and I land a job with Intermountain Youth Centers.  So I’m working with Navajo, Apache, and Pueblo youth in a group home setting.  I’m a frontline worker.  Natives working with Natives.  It was great.  There was one other Oklahoma Native staff at that time, and there were a few Navajo staff and I think maybe two Pueblo staff.  One lady, who I shall not name, I grew to like and gravitated toward her when it came to learning techniques to help these young men become less aggressive.  She was Navajo.  She had been with Intermountain for almost 30 years.  Had a lot of experience.  Plus, she spent good chunks of time in Oklahoma and had friends back in my home community.  I could joke around with her and feel comfortable enough to be myself.  Which is an important thing when you’re in a new environment and around a new culture.

She was an elder.  I respected her.  Then her character was diminished.

She was excited to tell me a good friend of hers from Oklahoma was visiting in Santa Fe.  Her friend was Kiowa.  I forget her name.  This was about twelve years ago, but I wouldn’t mention her name even if I remembered it.  I’m not trying to tell on anyone here. I’m trying to set up how this behavior ultimately makes us weak.

She invited me to met her Kiowa friend so I was equally excited.  I was going to interact with another Kiowa and at a time in my life when I hadn’t visited with a community member in over a year (Kiowa or Cherokee).  So I meet this individual at the main office of Intermountain and we sat down in the large conference room just off the main office area.  I was excited to introduce myself and tell her who I was.  I was looking forward to some reminiscing of Oklahoma.  I was missing the place.

What happened?  The visit quickly turned into an interrogation.  My supposed friend sat at the end of the conference table.  She was a tall lady, standing about six foot two.  The longer the conversation went on the lower my supposed friend shrank into her chair.  By the time the conversation was over, she was sitting so low in the chair the back of her neck was against the back rest.  It was ridiculous.

So this visiting friend didn’t want to reminisce about Oklahoma.  She wanted to know what I knew.  She asked me questions about landmarks, like Lake Lawtonka and Mount Scott.  Not like we were reminiscing about the places, but to see if I knew where they were and what they looked liked: topical information.  She attempted to correct me when I said my family organized the Oklahoma Gourd Dance Club.  Then I corrected her on the history of the Oklahoma Gourd Dance Club and told her there was a split in the organization at one point so there were two branches.

Then I told her who my family was.  The Kiowa lady went silent.  I named off my family, and this lady knew exactly who they were.  This was when I looked over at my supposed friend sitting at the end of the conference table and I had noticed how much she physical slouched into her chair.

See, the problem for folks is that I’m half Hispanic.  I don’t have a problem with it.  It’s who I am.  They’re the ones with the identity issues.  But depending on the time of day, the angle in which you’re looking, and how many shadows are in the room, I can either look fiercely Native or I can look fiercely Hispanic.

Needless to say I didn’t seek out this friend any longer.  I still respect the work she did with Native youth at Intermountain and the many Navajo youth she helped.  I respect her for spending her life making this world better in that regard.  But I don’t respect the shallowness of her character.

This phenomenon has occurred a few times in my life.  Some as grand as the one above, and others momentary and fleeting.  But each had the same scapegoating ritual.  Find someone in the room who you can blame for everything, and then cast them into the wilderness. Typical Girardian clichés.

So how does this relate to Native lit?  Native writers do this to each other all the time.  I’ve been in Native writing circles a very long time.  About ten years.  I’ve seen this happen at more than one institution.  Unfortunately, this scapegoating practice is not going anywhere.  In circles where people are new to each other and each are vying for the same attention (conditioned by hyper individualism for decades), there is no way to escape the scapegoating mechanism.  Girard would agree.

Some call it the Crabs in the Barrel Syndrome.  We’re keeping each other down.  Some Native writers have built an entire career on catching an In’din by his toe, or more a “fake” In’din by his toe.  But that practice comes out of “identity attacking” each other and Native writers needing to redirect the energy away from themselves, and they do so by pointing fingers at their selected scapegoat.

Smoke and mirrors.  When someone feels they’re Nativeness is called into question, typically they look for someone else and attack their identity.  Instead of just taking a moment and realizing all Native writers dance on the periphery.  Like gourd dancers around the drum, we all move in our own personal direction but we’re all dancing to the same beat.  We’re a community.  We’re all seeking the same end result: continuation.